Pain at the front of the thigh is also known as anterior thigh pain. Here we explain the common causes, as well as some less common causes which should not be missed.

Sudden onset anterior thigh pain
The following injuries tend to occur suddenly where you will know as specific point in time it occured: 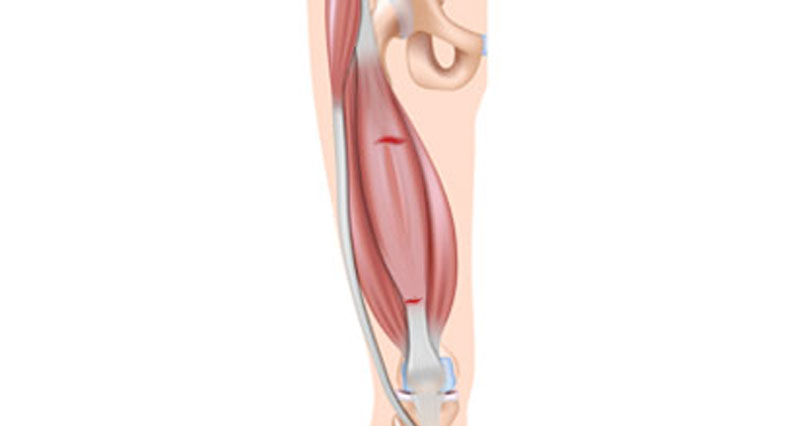 A thigh strain or quadriceps strain is a tear in one of the quadriceps muscles at the front of the thigh. It can range from mild discomfort to a full-blown tear of most of the muscle, resulting in severe pain and inability to walk. Symptoms typically include:

Sudden sharp pain at the front of the thigh.
Swelling.
Bruising may appear later.
Strains are graded 1 to 3 depending on how bad the injury is.

A dead leg, also known as a charley horse is a bruise or contusion caused by a direct impact to the leg, crushing the muscle against the femur (thigh bone) resulting in swelling and sometimes bruising of the thigh muscles.

Pain at the time of injury.
Restricted movement in your leg/muscle.
Swelling and later bruising may appear over time.
Thigh contusions range in severity from very mild which is hardly noticeable at the time, to severe injuries where you are unable to walk. Heat or massage should not be applied during the acute phase as this may lead to bone growth within the muscle (Myositis ossificans).

A traumatic femur fracture is a serious and usually fairly obvious injury caused by accident or severe impact.

The patient will feel severe pain in the thigh.
There may be deformity in the thigh, for example, the leg may be at an angle or the injured leg appearing shorter than the other.
A considerable amount of swelling may be visible and the patient will be unable to move their leg.

These cause pain at the top of the thigh/front of the hip where the tendon of the powerful rectus femoris muscle originates.

Gradual onset anterior thigh pain
The following injuries tend to occur gradually over time through overuse, or from an acute injury which has not healed properly”

Myositis ossificans occur as a complication of not treating a contusion correctly. It involves a small growth of bone within the muscle. Symptoms include:

Muscle pain, particularly during exercise.
Restricted range of movement.
A hard lump may be felt deep in the muscle.
An X-ray can confirm the diagnosis and show bone growth.

Pain which develops gradually as a dull ache.
Pain is made worse when a bending force is applied to the femur.

This causes gradual onset pain at the front of the hip where the Rectus femoris tendon attaches to the pelvis. It may occur through overuse, or follow a tendon strain/rupture which fails to heal properly.

Other causes of anterior thigh pain which should not be missed:

Slipped capital femoral epiphysis occurs when there is a fracture at the neck or top of the thigh bone. The injury happens to the epiphysis which is where the bone grows as children grow older. It is more common in boys aged 11 to 16 years old and occurs gradually over a period of time.

Perthes’ disease affects children, most commonly aged between four and eight, but can also occasionally occur in younger children and teenagers. Tiredness and groin pain are two common symptoms, and they may have a noticeable limp. Medical help is needed to diagnose this condition as early as possible to try to prevent and limit any future problems.
Compartment syndrome – this occurs when the muscle grows too big for the sheath surrounding it and can be acute or chronic.